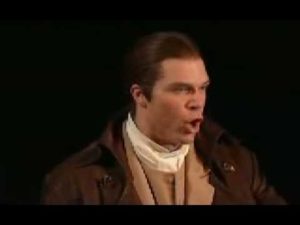 Anna Mika: What were Your first experiences with Harnoncourt like? Did You know his special theories before singing with him?

Rodney Gilfry: Before working with Harnoncourt at the opera in Zürich, I had heard that he was very specific about how he thought Mozart should be performed, and I was looking forward to the challenge.  When we did work together, I was amazed and sometimes perplexed at his choice of tempos (he would say it was not “his” choice, but rather the only tempo possible) and the way he wanted phrases to be articulated. As regards tempos, he always had excellent reasons to support his tempos.  He explained to me how his research showed clearly that Mozart was completely consistent with tempo indications in his music.  And how a particular tempo had to fall between the next-slower tempo and the next-faster tempo in Mozart’s range of tempos.  This lead, for instance, to an unusually “slow” overture, to an usually fast final section of Almaviva’s aria “Ah, no! Lasciarte in pace…”, to a painfully slow duet between Susanna and Cherubino “Aprite, presto aprite!”  For that duet, he explained that it was so “slow” because Susanna and Cherubino were paralyzed with fear.  As if Cherubino had  “Sheisse in den Hosen” (his words) and couldn’t move.  I was extremely impressed and agreed with Harnoncourt’s approach:  that an interpreter should  first try to discover what the composer really intended, and try to make that work before deciding to do something else.  For me, this opened doors of understanding into Mozart’s brilliance as a dramatist.  As regards phrasing and articulation, Harnoncourt identified which phrases were primarily melodic, which were rhythmic, and which were primarily about text.  Then he would insist on the melodic phrases being as melodic as possible, the rhythmic phrases being really clear, and the textual phrases being as parlando, and as free as possible.

During Your engagement at Zurich Opera House You did several operas and concerts with him. I would like to ask You for some statements to special roles. What was Your Don Giovanni with him like, or the second Conte with Flimm?

“Finch’ han dal vino”, (what we call in English the “Champagne aria” but which has nothing at all to do with champagne!) was especially difficult.  According to Harnoncourt’s understanding of the tempo, it was so fast as to be impossible.  When I told him it was impossible for me, he grinned and said “that’s exactly what it should sound like!  It should be just a little faster than possible!”  He definitely got the effect he wanted.  I was particularly impressed by the way he did Leporello’s “Madamina! Il catalogo è questo”.  For him, the melody was really not important, it was all about the words.  So he instructed the Leporello to sing the words without regard to the rhythms.  He wanted him to avoid singing on the beat if possible: he might start a phrase late, then accelerate and end it early, while the orchestra kept a steady pace.  It took on a marvelous parlando, jazz-like phrasing that seemed completely right, because it was a “text aria” that became all about the text.

Harnoncourt always insists that the singing match the character.  When we did performances and a recording of Schumann’s Genoveva in Graz, it was very challenging.  He insisted that my character, Hidulfus, should sing in a way that was fanatical and violent.  As he put it “I should imagine that blood would spurt out of your mouth at any moment!” and he would make throat-clenching gestures while he was conducting.  This is really not very helpful when one is trying to sing in a way that doesn’t hurt the voice!

You did the Da Ponte Operas also with John Elliot Gardiner. I think there is a great difference in their understanding of Mozart. Would You mind describing this difference?

I loved doing the Da Ponte operas with John Eliot.  He is also a great scholar, and completely in love with and in awe of  Mozart’s music, but he is quite a bit more practical than Harnoncourt.  If a tempo just seemed too slow or too fast for his concept of the drama, or for the singer, he would make adjustments.  In this way, he was more singer-friendly, and his performances were beautifully paced, because if one scene lacked a little energy, he would generate more energy in the next scene by a change of tempo or intensity.  My greatest moments on stage were under John Eliot’s baton in Nozze di Figaro and Don Giovanni.  Gardiner is more of a showman than Harnoncourt.  He seems to feel that he, too, is part of the drama.  (And how can the conductor not be?  He is right between the audience and the stage, so every move is seen by the audience.)  Harnoncourt, on the other hand, doesn’t seem to care what he looks like in performance.  He makes distinctly “un-maestro-like” gestures and looks rather foolish sometimes.  I admire both men for their dedication and tremendous energy, and their unique approaches to the music they love so much.